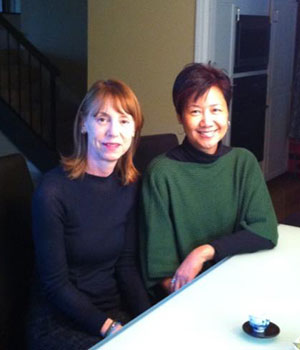 Below, Linda Louie shares photos and some of the experiences that she and Lisa See had on their trip to pu-erh tea producing regions in China. Linda travels to Yunnan annually to buy teas for her business, Bana Tea Company.

I have been a long time fan of Lisa See. I was totally delighted when I met her through mutual friends in 2013. During her visit to my home, Lisa informed me that she planned to write her next book using pu-erh tea as the backdrop of the story. Before she left, we made plans for her to come along with me to Yunnan during my tea sourcing trip the following spring.

In March of 2014, we embarked for China. Our first stop was GuangZhou, a major metropolitan coastal city and also my birth place. In addition to visiting the Fangcun Tea Market, which is the biggest tea market in China, we visited Shamian Island. Shamian Island is not really an island. It is more of a sandbank connected to the mainland by two small bridges. Walking in Shamian, you do not feel you are in China because the place is tranquil and picturesque marked by tree-lined pedestrian walkways, gardens and colonial-styled buildings. Lisa and I took a leisurely stroll on the island during our second day there.

Bottom left photo: The colonial style architecture on the island draws a sharp contrast of the landscape of the mainland.

Right photo: Inside the Fangcun Tea Market, you can find almost any tea and tea related products. 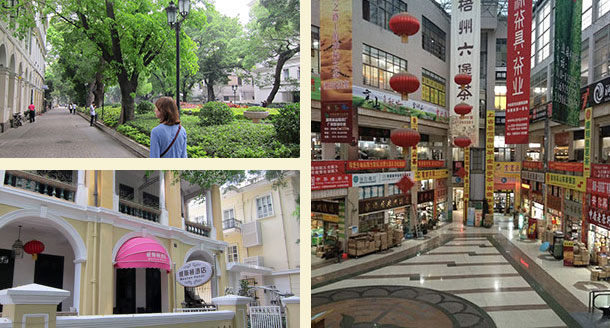 The next day, we flew from GuangZhou to Xishuangbanna, arriving in JingHong late at night. After being picked up by our driver, Mr. Lee, we drove an hour and a half to our hotel in Menghai.

The next morning, we met up with my tea master, Vesper Chan, at our hotel. Also with us were Jeni Dodd of Jeni’s Tea in NY and Buddha Tamong from Nepal. Master Chan and his associate, Mr. Liu, drove us up the mountain to Mengsung, a well-known pu-erh producing area within Xishuangbanna Prefecture. Upon arrival, a delicious lunch of the local cuisine had already been prepared for us. After we ate, we toured Mr. Liu’s tea processing factory and hiked into the ancient tea garden.

Right photo: All of us enjoying a local lunch. 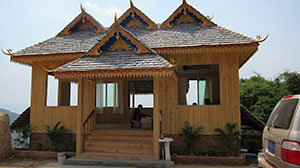 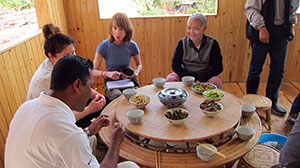 Left photo: Large iron woks are used for pan firing the green leaves to reduce moisture in the leaves and to halt oxidation. This process is called “killing the green.”

Right photo: Pu-erh tea needs to be sun-dried rather than oven-dried as in the case of other teas. This is a greenhouse-like structure in which processed leaves are being dried. 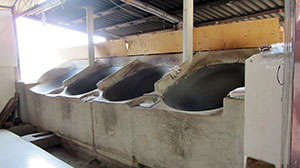 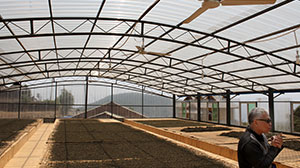 After touring the tea factory, we hiked into the old growth tea garden. Different from most of the tea plantations in the world, tea trees in Yunnan were planted by seeds and were allowed to grow naturally to as high as ten to twenty feet tall. These tea trees are very resilient, having thrived in the forest for centuries. They do not require fertilizers and pesticides and the leaves make the most highly sought-after pu-erh tea.

Left photo: Lisa standing next to an old-growth tea tree. 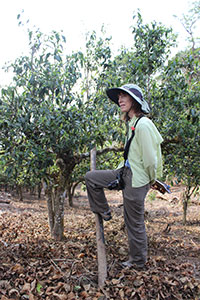 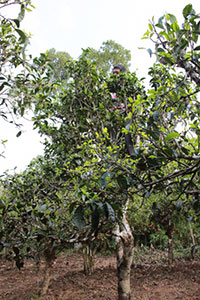 The production of ripe pu-erh began around 1976. Raw pu-erh leaves were piled and moistened to undergo fermentation. The purpose was to quicken the aging process of the leaves in order to emulate the aged raw pu-erh. We visited a pu-erh fermentation facility where we touched, smelled and examined fermenting tea leaves.

Right photo: Master Chan explaining to us the how tea leaves undergo fermentation. 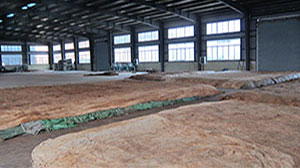 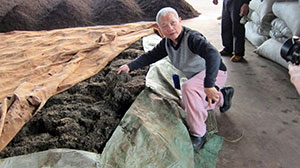 We arrived at Ahbu’s home in Nannuo Mountain the next day. Ahbu is the daughter of an Ahka tea farming family. Her mother (the fourth person from the left) is a retired award-winning tea maker. She returns to the mountain to help out during spring harvest.

Bottom left photo: A swing in Nannuo Mountain used during the annual Swing Festival that honors the ancestors and calls for a good harvesting season. Every Akha village has one. 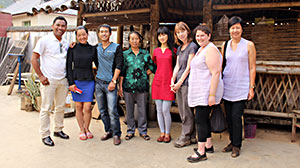 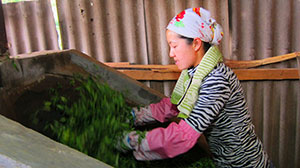 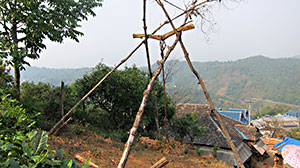 Yiwu was our last stop. Yiwu is one of the most famous pu-erh producing regions in Yunnan and the starting point of the famous Ancient Tea Horse Route. During the Qing Dynasty when pu-erh was designated as a tea to pay tribute to the emperor, many of the tribute teas were made in this region.

Left photo: This is the site of a famous tea factory during the turn of the century called CheShun Hao

Right photo: The road traveled by the horse caravans back in the days when pu-erh tea was at its peak. 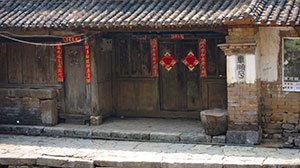 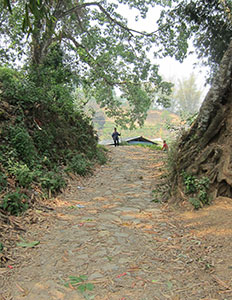 In rural China, breakfast is rarely served in restaurants.

Left photo: We ate on the sidewalk outside of a rice noodle shop.

Right photo: This is a typical breakfast for the locals. The brown balls are mochi-like sweet covered with ground peanut. It was quite delicious. 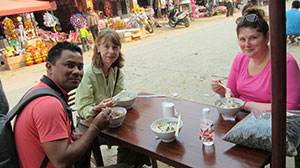 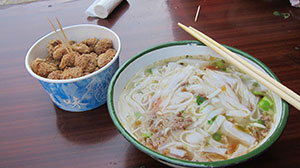 I have known the Yu family since 2009. They own a tea garden and have been producing pu-erh tea for decades. Due to the increased popularity of pu-erh tea in China as well as abroad, The Yu family has been able to build a two-story modern style home and employ many workers.

Right photo: Tea sorters sorting out the unwanted old leaves from the pile.

Bottom photo: Lisa and I standing in the tea processing area in the back of the house. 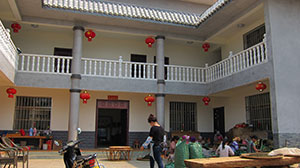 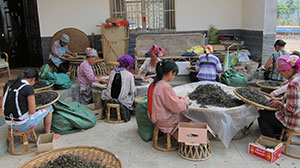 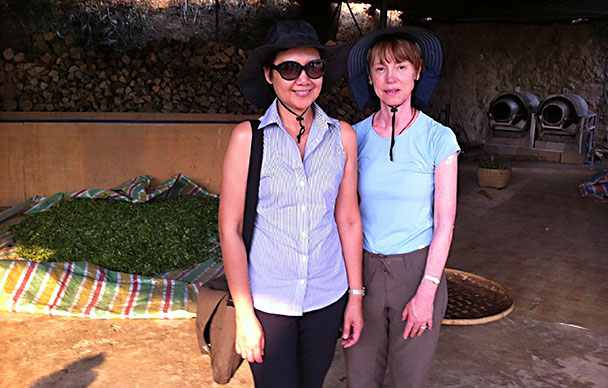 On our last day, we drove back from Menghai to Jing Hong to catch the flight back to GuangZhou the next morning. Our friend, Mr. Chen, who is a gym teacher and the owner of a guesthouse in Nannuo Mountain, treated us to a delicious Dai cuisine dinner. 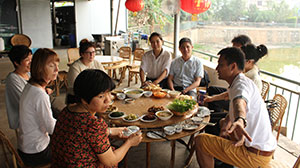 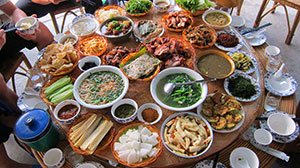 There is a popular saying in Chinese, that is “Drink tea, make friends.” Through tea Lisa and I have become friends. We hope tea will also bring you many long lasting friendships. 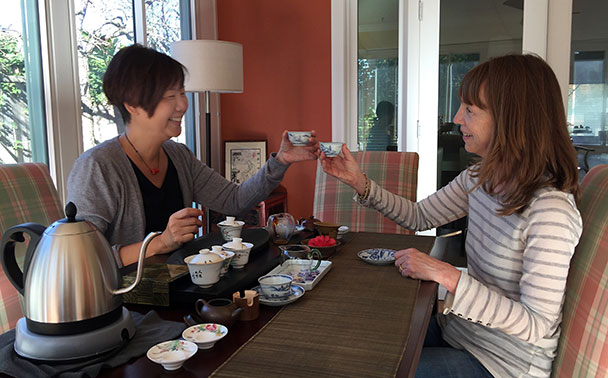