What is White Tea? 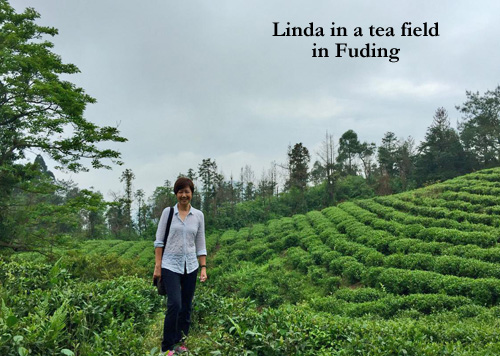 White tea is one of the six major categories of tea, which also includes green, black, oolong, dark, and scented tea.  It is minimally processed and is famous for its delicate and soothing qualities.  White tea is slightly oxidized and it is not bitter no matter how you brew it. For tea drinkers who do not like the bitterness in tea, white tea is a perfect choice.

Fujian province in Southeast China is home to white tea. This region accounts for the majority of the white tea production in the world. The classic white teas are from Fuding county in northeast Fujian Province.

Fuding's white tea production can be traced back to the Tang Dynasty in the 7th century.  Legend has it that, long ago, there was an outbreak of measles in the region.  Every farmer tried to find the right herbs to cure the disease.  A local tea and orchid farmer, known today as Lady Lan, had a dream one night guiding her to find a tea bush in the mountain.  The next day, she trekked through mountains and streams and came across a bush full of leaves with abundant downy white fuzz.  She plucked the leaves, made the tea, and served the concoction to the afflicted villagers.  Soon, the measles outbreak dissipated.  Lady Lan, later named as Tai Lao, is revered as the founder and spiritual embodiment of white tea. 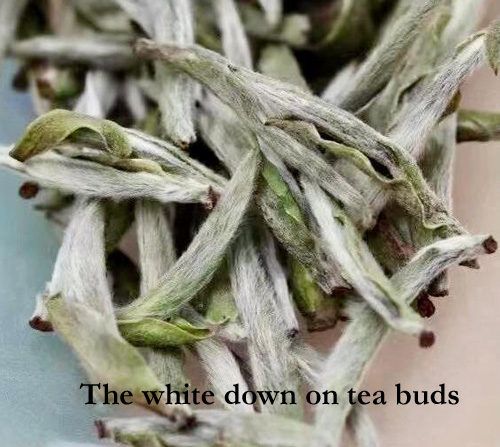 White tea got its name from its two cultivars from which the tea is made: Da Bai (Big White) and Bai Hao (Downy White).  The buds of either tea plants are covered with tiny silver color fuzz, thus, the tea is called "white tea."

There are four basic types of white tea, classified by the order of the leaves in the tea branch. Silver Needle (Yin Zhen) is made from the unopened buds on the top of the tea branch. This is the most expensive white tea because buds are least abundant and the picking is the most labor intensive.

White Peony (Ban Mudan) consists of a set of a bud and one or two leaves. White Peony got its name because the appearance of a bud-set resembles a flower and that peony symbolizes prosperity.

Long Life Eyebrow (Shoumei) is made with the fully opened 3rd or 4th leaves from the top of the tea branch.  As the leaves that make Shoumei are more abundant and less delicate, it is the most affordable  among all white teas.  When I visited Fuding in 2014, the owner of the tea factory told me tea farmers there have a long tradition to keep and age Shoumei at home for medicinal usage.  Aged Shoumei was also a staple at dim sum restaurants in Hong Kong along with pu-erh tea.  In recent years, aged white tea became very popular in China as the tea gets sweeter and mellower over time. Shoumei got its name from the appearance of its leaves, which is coarse and irregular, resembling the bushy eyebrow of the auspicious Longevity God. 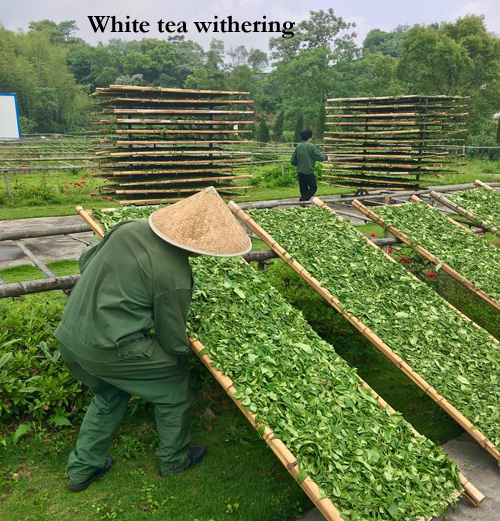 Tribute Eyebrow (Gongmei) is probably the most misunderstood white tea.  Some even claim that it is the lowest grade of white tea.  Gongmai from Fuding is actually made of a different cultivar called Xiao Bai (Small White) and is planted by seeds. As such, Gongmai is more genetically diverse, and the flavor is more complex.  Xiao Bai cultivar does not transplant well in other areas and few farmers are planting from seeds nowadays.  Therefore, authentic Gongmai's supply is hard to come by.  The different grades of Gongmai depend on the picking time and the grades of the leaves.

As stated earlier, white tea is simply processed; therefore it is said to retain most of the anti-oxidant properties inherent in the tea leaves.  If you have not tried white tea, check out our organic white tea selection from Fuding's Fang Ming Tea Factory.