The Story of 88 Qing Bing 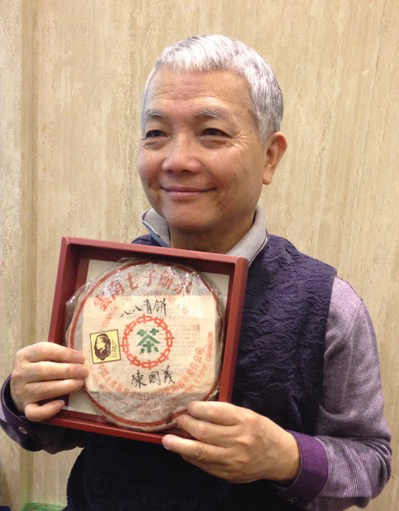 Vesper Chan started his tea business in Hong Kong in 1988. Young raw Pu-erh tea was not particularly popular at the time. In 1993, Master Chan was approached by Chen Qiang, a sales representative of Menghai Tea Factory (one of the four state-owned tea factories in Yunnan). He offered to sell Master Chan a batch of raw pu-erh produced in the late 1980s at a special price of $7 HKD (less than $1.00 USD), but Master Chan was required to buy the entire batch of 30 tons of tea. Master Chan was very impressed with the quality of this tea, but storing and marketing 30 tons of tea presented a huge challenge for him, not to mention that most tea drinkers in Hong Kong at the time only drank ripe pu-erh or aged pu-erh. It was believed that raw pu-erh was too bitter and astringent.

After contemplating for a few days , Master Chan decided to make the purchase as he thought the quality of the tea was too good to pass up. In subsequent years, Master Chan opened classes to teach tea drinkers in HK to appreciate and properly brew raw pu-erh. He also believed that pu-erh tea should be stored and aged in a relatively dry environment with adequate ventilation. (Traditionally, most pu-erh teas were aged in basements in buildings near the harbor where humidity was high). He believed that the dry storage method allows the tea to age naturally, thus able to preserve its natural characteristics and flavor.

Master Chans forward thinking ideas and trend-setting attitude paid off in mid-2000s when pu-erh tea collectors and merchants in HK, China and Taiwan all started to notice this first dry-stored raw pu-erh cake. To celebrate the success of this tea cake and to distinguish it from other tea cakes produced by Menghai Tea Factory, Master Chan renamed it as 88 Qing Bing, 88 being an auspicious number in Chinese and to simultaneously commemorate the year he started his first tea shop. Master Chan expanded his tea business in China in 2009 and has since received many awards for his tea-related accomplishments and contributions. 88 Qing Bing has become a legendary and iconic raw pu-erh cake in the modern history of pu-erh tea. I had the good fortune to taste this tea when I visited Master Chan in Guangzhou in 2013. It was, as you would expect, quite exquisite.