"How much caffeine is in tea" is the most commonly asked question I receive and it is likely a common concern among tea drinkers.

Caffeine is a compound inherent in all teas, made from the tea plant Camellia Sinenses. In other words, all teas (green, white, oolong, black, pu-erh), with the exception of herbal teas, contain caffeine.

Caffeine is a bitter compound.  Bitterness is very much a part of the Chinese culture.  Being able to tolerate hardship (chi ku, means "eat bitter") is a virtue valued by the Chinese.  Ku jin gan lai is a popular saying that means "at the end of the bitter, sweet will come."  The concept gives people in hard times, so much a part of Chinese history, a glimpse of optimism. 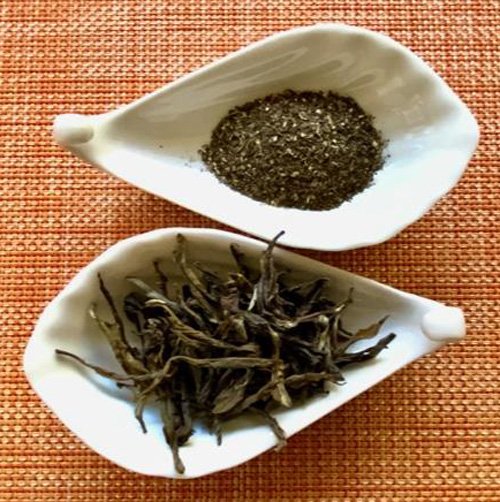 Caffeine is also a natural stimulant.  This was the reason why tea was so beloved by the Buddhist monks thousands of years ago because it helped them stay awake and mentally alert during long hours of meditation. In today's society, intake of caffeine is a daily routine. However, the level of tolerance of caffeine varies among people. Therefore, tea drinkers have always wondered what kinds of tea will best match their caffeine tolerance and are best suited for their health.  While all teas have caffeine, the amount of caffeine in your cup of tea varies depending on a number of variables:

The amount of time the tea leaves are steeped in the water is one of the most critical factors to determine caffeine content in your cup of tea. According to Dr. George Ellmore, Associate Prof. of Biology at Tufts University, 90% of caffeine in tea is released after the tea leaves have been immersed for 2 minutes in hot water. If you steep your leaves for 2 or more minutes, all the caffeine comes out in the first cup.  Conversely, if you use a short steep method (e.g. the GongFu style where the steep time starts with 10 sec. and gradually increasing it over a number of infusions), only a portion of the caffeine is being extracted out each brew, reducing the caffeine content.

3. The types of leaves that are used for the tea:

Caffeine is a protective agent for tea trees from attacks in their natural surroundings. The new bud-set near the top of a tree branch needs the most protection and thus contains more caffeine.  Another common defense is toughness against the elements. Mature leaves further down the tea branches are less defended by chemicals and more by the toughness of the leaves.

Do different methods and types of tea processing affect caffeine content? According to Professor Ellmore, caffeine is a very stable compound. It does not break down in light or heat or over time.  As such, variation in caffeine content between types of teas is minor (no more than 20%). That said, processing steps such as toasting, roasting or fermenting, will break down the structure of the leaves, thus shrinking their weight. Since caffeine is very stable and will not break down, it becomes more concentrated in the processed tea.  (For example, 100 grams of leaves contain 3 grams of caffeine. After processing, the processed batch now weighs 90 grams, but the same amount of caffeine remains, making the processed batch 10% more concentrated in caffeine.) This is the reason why more processed teas (e.g. black tea and ripe pu-erh) are said to contain more caffeine than less processed teas.

In sum, tea leaf chemistry is complex, so definitive or straight-forward answers to caffeine in tea is difficult. There is also increasing evidence that caffeine content depends on growing conditions (such as climate, elevation, sunlight, rainfall, fertilizers, etc.).  Tea offers an abundance of health beneficial compounds.  In addition to caffeine, tea is known to also contain a unique amino acid, L-theanine, that relaxes our minds. For those who are sensitive to caffeine, try mitigating its effects while still take in all the healthy benefits of tea by using a high quality whole leaf tea, loweribng the water temperature, and shortening the steep time.